Beyonce Knowles' father Mathew has been singing the same song her serenaded his baby daughter with to his granddaughter Blue Ivy Carter. 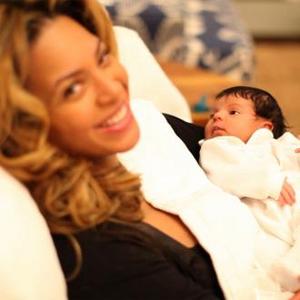 The 'Crazy In Love' hitmaker's dad Mathew Knowles - who managed her career until last year - dotes on the two-month-old tot and serenades her with the same songs he used to sing to baby Beyonce.

Asked about being a grandfather on UK TV show 'Lorraine', Mathew, 61, said: ''Solange, my youngest daughter has Julez, my grandson who I love, he's seven years old, he's at school and then there's Blue Ivy.

''I was with Blue Ivy two days ago, I had her in my arms and was singing a song I used to sing to Beyonce and then after I finished singing the song she kind of went, 'Ahhhh.' ''

All of Beyonce's family love spending time with Blue Ivy - the singer's first child with husband Jay-Z - and her mother Tina recently revealed the tot is ''doing great''.

While Tina is smitten with the baby, she is unsure just yet as to which of her famous parents the tot resembles.