The pop superstar and husband Jay Z have kicked off their 'On The Run' world tour. 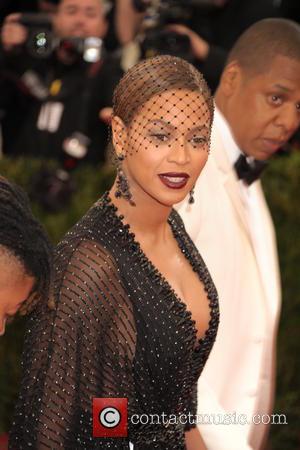 Beyoncé and Jay Z have kicked off their eagerly-anticipated On The Run world tour in Miami, with an inaugural performance taking place on Wednesday night (25th June). At the Sun Life stadium, the hip-hop couple treated fans to an explosive joint performance and a starry night to remember.

The 'Sweet Dreams' singer's frequent outfit changes were the talk of the evening, with an array of risqué new costumes showcased to dazzling effect. After appearing onstage dressed in a Versace fishnet bodysuit complete with matching balaclava, Bey swapped into a denim playsuit, a Versace leotard and a dominatric-style leather suit.

However, the evening's most widely-shared ensemble was a shining black bathing suit with two holes cut out for buttocks that the star and her backing dancers wore whilst performing the singer's signature booty-shimmy routine.

Justin Bieber's widely publicised mugshot was displayed on the stage's giant screens as Beyoncé told the audience that "Even the greatest can fall," which has prompted something of a backlash from the Canadian popstar's diehard fans, "the Beliebers," according to the Mirror.

More: Beyoncé and Jay Z hire biggest ever security team for 'On The Run' tour.

As well as displaying celebrity mugshots, the couple also treated fans to first glimpses of intimate family footage, including a clip of the couple exchanging vows at their 2008 wedding and a video of their two year-old daughter, Blue Ivy.

The sweet family showreel seemed to hit back against the recent rumours that the couple are experiencing marital issues, with talk of affairs, and imminent divorce. A family altercation involving Jay Z and Beyoncé's sister Solange at the Met Gala was brushed under the rug as the most powerful couple in showbiz celebrated their ironclad union.

Beyonce and Jay Z will also travel to other North American cities, including Chicago, Los Angeles, Seattle, San Francisco, and Toronto and Winnipeg in Canada before performing two shows in Paris in September.

Beyoncé & Jay Z Have Kicked Off Their 'On The Run' World Tour.

Justin Bieber's Mugshot Was Projected As Beyoncé Warned: "Even The Greatest Can Fall."