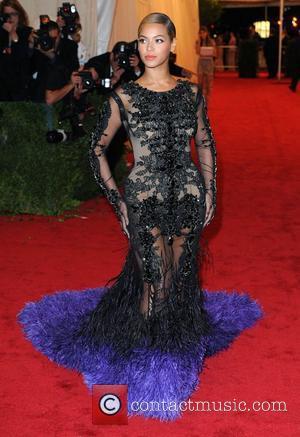 Beyonce told fans in Atlantic City on Saturday evening (May 26, 2012) that she planned on getting "chocolate wasted" after successfully losing 60lbs in weight. The new mother gave birth to her first child Blue Ivy in January 2012, though has lost the majority of her baby-weight in less than four months, reports the Associated Press.
Performing at Revel Beach's Ovation Hall in Atlantic City, Beyonce told fans, "Y'all have no idea how hard I worked!...I had to lose 60 pounds. They had me on that treadmill. I ate lettuce!". However, the singer made it crystal clear that she was ready to ditch the healthy eating diet for something a little more sugary, saying, "Now tonight I'm gonna get chocolate wasted!" Her treadmill admission would certainly have pleased one very special audience member - Michelle Obama - who has partnered with the singer in the past for her 'Let's Move!' campaign. According to US Weekly magazine, the First Lady enjoyed the concert with her daughters Sasha and Malia, who were dancing in their seats. One concertgoer said, "They sat up in a private balcony with Gayle King. Michelle was jamming out to 'Crazy in Love'.When Beyonce told the crowd to get up and jump, [Malia and Sasha] stood and started dancing and jumping. They were shouting when Beyonce asked, 'Do girls run the world?".
Beyonce is performing four concerts at the Revel Casino as part of Atlantic City's Memorial Day celebrations.