Beyonce and Nicki Minaj Team Up For Flawless Performance In Paris

The duo performed he track together for the first time on Friday night in Paris.

Beyonce gave fans at her Paris concert an extra special treat on Friday night when rapper Nicki Minaj joined her on stage for a rendition of their duet ‘Flawless’. The performance marked the first time the pair had appeared on stage together, despite releasing the duet last month. 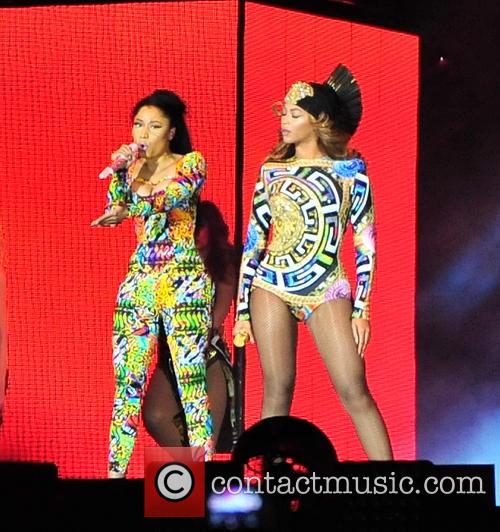 Dressed in a patterned Versace leotard and a spiked headpiece, Queen Bey was joined on stage by the diminutive ‘Anaconda’ singer who sported a matched catsuit and high ponytail. The performance closed the Paris concert which was part of Beyonce’s ‘On the Run’ tour with husband Jay-Z.

Back in August the pair released the remix unannounced, marking the first time they had collaborated together. In the song’s lyrics, Beyonce appears to allude to the elevator fight which happened between her sister Solange and husband Jay-Z earlier in the year. "Of course sometimes shit go down when it's a billion dollars on the elevator,” Beyonce sings on the track.

Minaj seemed delighted at the opportunity to share the stage with Beyonce. Taking to Instagram the she shared a picture of the pair together captioned, “The QUEEN, could never thank you enough.” The rapper then went on to share videos from the evening, including one of her entranced captioned, “The entrance. On the run tour. PARIS w/QUEEN BEY & KING JAY.”