Review of Orthodox Album by Beware of Darkness

Following support slots with some of the biggest names in alternative rock (Smashing Pumpkins, Deftones, Stone Temple Pilots and Bush), Beware of Darkness have come out all guns blazing with their debut album, Orthodox. Beware of Darkness are proud to wear their influences on their sleeve, but rather than trying to imitate their idols, the band have merged the sounds that have inspired them to create something new and exhilarating. 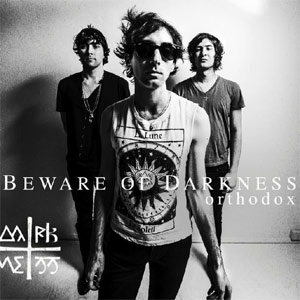 The album kicks off in high gear with the exhilarating rush of Howl, which features all the hallmarks of a good garage rock song. There is the fuzzed up guitar tones, four on the floor drum beats and wailing vocals you might expect from a band like The White Stripes or Wolfmother, paired with an incredibly well played bluesy guitar solo. This goes straight into the Stones-y riff rock of Sweet Girl. This song is much more playful with bouncy riffs and tasteful lead guitar work. You get a sense that somewhere in the yelping vocal work, there are some truly interesting lyrics such as this couplet: 'I wish I was a surgeon so I could rip your heart right open, and I could find the spot that broke me'. For a while at least, this is as raucous as the album gets as next we are into Ghost Town, a much darker and more psychedelic song, taking in a string section and slide guitar.

The album comprises of four distinctive movements. After the roaring opening movement, it is the second suite of songs which highlights just what a force Beware of Darkness can be, taking on a much more sombre and heartbroken tone. Highlights of this section include the soaring Amen Amen, and perhaps the highlight of the entire album, All Who Remain, which features the lyrics ''when you leave this life the world will be a darker place for all who remain" which is simplistic but, crooned over the introspective and sad instrumentation and an incredibly tasteful guitar solo which fits the song to a tee, becomes stunning. It is a mind boggling contrast between this and the teeth rattling opening songs.

Towards the end of the album it begins to tail off into psychedelia and somewhat loses its way. The stand out song in the final part of the album is Morning Tea, which could be mistaken for an updated take on the work of Queen or even ELO.

Orthodox is an incredibly good start to the career of this young band. Its highs (Howl, Morning Tea, All Who Remain) are truly astounding songs and you have to commend a band who has the confidence to explore so many different genres on one disc, even more so given that it is their debut. It would not be ridiculous to expect great things coming from Beware of Darkness.