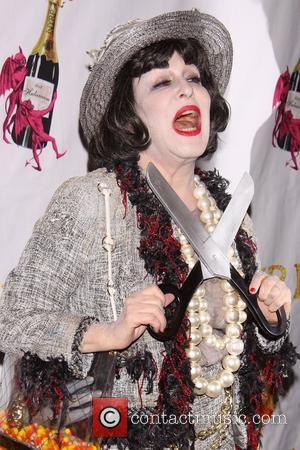 Each year the veteran entertainer hosts her extravagant Hulaween bash to raise funds for the organisation she founded in 1995 to improve Big Apple parks and outdoor spaces, and this time the event took on a deeper meaning as the city struggled to pick up the pieces from the post-tropical cyclone.

She tells Us Weekly, "There's never been a time where our organisation is needed more... Every public park is closed because it's too dangerous to go in. These extreme weather events are happening more and more and there's a pattern to them. The quicker everybody wakes up... the quicker we will all be able to work together to do something about this. Now it's on our doorstep and we have really got to pull together."

Former Will & Grace star Debra Messing, rock group Blondie, designer Michael Kors, and burlesque dancer Dita Von Teese all turned out in costume to support the event and Midler is grateful to those who braved the weather for her party.

In a post on Twitter.com, she writes, "Huge Huge thanks to everyone who made @Hulaween such a success! Nyrp is ready to go forward for another year thanks to you intrepid NY'ers!"