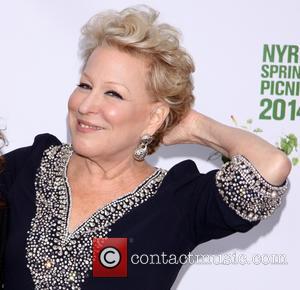 It's The Girls will feature the Beaches star's covers of songs by The Boswell Sisters, The Ronettes, The Supremes, The Andrews Sisters and TLC, whose Waterfalls hit has been revamped as a cabaret-style track.

Midler tells Billboard.com, "I have loved the sound of females harmonising since I was a kid; I always sang along. Didn't we all? I think the idea that you could become part of the group was the thing that endeared me to the girl groups. You weren't just singing along, you were there!"

She continues, "The Boswell Sisters was the first girl group record I ever owned. A friend of my parents gave it to them, and I played it to death. They killed. They are nearly forgotten today.

"The '60s were the height of girl-group frenzy, so there were a lot of songs to chose from, but from the '90s on, my favourites were Tlc and Destiny's Child. Waterfalls was a heartbreaker, especially if you were a mum, and it had a big effect on me. I never thought I would have the nerve to sing it, but we had an idea for it that works, and I am so glad I took the chance."

It's The Girls will hit retailers in November (14).