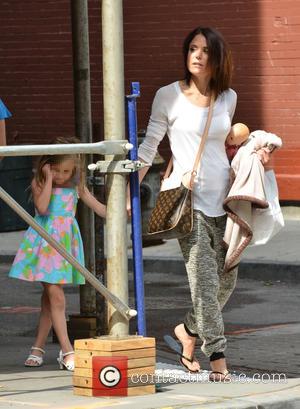 The pals have been spotted out and about on a number of apparent dates after posing together at a TV industry party in New York in May (15), and reports suggest they were seen enjoying a Los Angeles Dodgers baseball game against the Philadelphia Phillies last week (06Jul15).

A source tells Eonline.com the pair has been "enjoying each other's company casually for a few months now".

However, The Real Housewives of New York star Frankel has taken to Twitter.com to debunk the claims, insisting she was in the Hamptons in Long Island, New York when the Dodgers/Phillies game was taking place.

She wrote, "Wow... How did I manage to be at a @Dodgers game & be in the Hamptons at the same time?!!! @ericstonestreet".

Stonestreet has yet to comment directly on the romance speculation, but jokingly tweeted, "Hey @Bethenny. Im a big fan. Can I get a follow?"

He has been single since splitting from longtime girlfriend, Broadway actress Katherine Tokarz, in 2012.