Posted in Press Releases on 29 November 2012 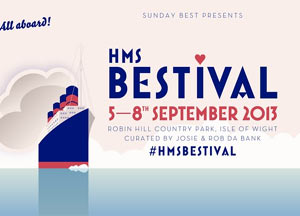 Can you believe that 2013 will see Bestival hitting those magic double figures? That's right, Bestival is ten and we're really pushing the boat out for what promises to be our biggest and best year ever.

To celebrate we're beating the drum for a whole decade of dancing on the Isle of Wight, by revealing our 2013 theme and inviting you to jump aboard HMS Bestival! Yes indeed, we're manning the rails, splicing the main brace and rocking the sailor's hornpipe - it's all hands on deck, so best make sure we like the cut of your jib!

HMS Bestival skipper Rob da Bank said: "All the nice girls love a sailor and all the boys love a mermaid. Think deckhands, anchors, beach parties, Moby Dick, tattooed ladies, Titanic, shipwrecks, Hawaii, Treasure Island, rum bars in scuzzy ports, message in a bottle, the crow's nest, sea legends, monster breakers and tall tales of life on the ocean waves. Nautical but nice! There's no better time to join the good ship HMS Bestival and our trusty crew of merrimakers than now with Crimbo approaching, so get your Golden Early Bird Tickets and prepare to set sail me hearties!"

Marking our mighty 10th anniversary we'll be throwing an epic Bestival Classics opening night birthday party on Thursday 5th September. Celebrating 10 years of decadence, our fine hosts Rob da Bank and The Cuban Brothers will take the helm for a night of merry mayhem, featuring some extra special guests who will be spanning a decade of killer lines ups with some truly banging Bestival anthems for all you salty seadogs. Keep an eye on Bestival's Twitter and Facebook because we'll be asking all you Bestivalites who you think should be dropping the classics in the next few weeks. The party starts here, so don't miss out on our four day spectacular!

And so to Christmas! Yes folks, with the festive season upon us we have news of our last chance Early Bird Christmas Promotion to thank all our extra special loyal shipmates for an amazing ten years. Buy Early Bird tickets to Bestival 2013 NOW and you'll get them fixed at 2012 prices. And, because it's Christmas, we can help you make a real gift of it with an exclusive memento golden souvenir ticket to put under the tree and light up someone's face on Christmas day. You've got to hurry though as numbers are limited, so take advantage of the offer before it's too late! Early Bird tickets are on sale until January 1st 2013. Don't forget, you can buy your Early Bird tickets through our weekly payment plan too, so there's no excuse not to join us for the party of the year!

All Tickets - will incur a booking fee.

We're pleased to announce that we will be offering a new 34 week payment plan for Friday entry weekend tickets and a 36 week payment plan for Thursday entry weekend tickets which means that an adult ticket can now be bought at a payment of £5 per week over 34 or 36 weekly payments. Once you have signed up to the payment plan, which basically means giving your agreement by ticking the bank mandate form on Ticketline's website, we will automatically debit your card on a weekly basis. NB: Booking fees will be charged with your initial transaction. Please check www.bestival.net for terms & conditions