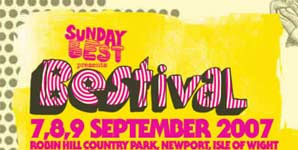 My belongings hanging from every possible limb for the next three days, I headed straight off to the campsite - joining a stream of festival goers all struggling with tents, duvets and even suitcases ready for Rob Da Banks Bestival 2007.

My first stop was The Big Top which resembled an English Country Garden with a full-sized tree, flowers and ivy creeping up around a large pagoda, Welcome to Bestival. Mr. Scruff was at the decks belting out some chilled out hip hop which was perfect for those who wanted to boogie and also for those who wanted to just chill and have a beer break after sweating out over tents and inflatable mattresses.

The first thing you'll always notice about Bestival is the dress code.. Fancy dress being the norm and if your not kitted out in the latest ensemble of your grannies tea towels or dressed as a Smurf then you do feel like you are the odd one out!

I headed over to the main stage to watch regular crowd pleasers and now festival veterans 'The Levellers' take to the stage with hits such as 'One Way' and 'Riverflow' seeming the crowd favorites the Levellers don't do their gigs without their 12 hour long didgeridoo spectacular! The evening carried on with supreme sets from Maccabees, Barry Peters, The Go! Team and a cracking set from The Chemical Brothers, djing in front of a large LED curtain whilst scary clowns and 10ft dancing people was just the beginning of an awesome light show for hits like 'Hey Boy, Hey Girl' 'Galvanize' and 'do it again' they capped of an amazing first day.

Saturday and Sunday didn't disappoint with the likes of Billy Bragg, Cuban Brothers and Beastie Boys, Mc Beardyman (UK Beat Boxing Champion), Kate Nash, Gossip and Primal Scream, to name but a few, all capping off the largest fancy dress party in Europe.

The Beastie Boys performed two sets over the weekend, stating 'Seeing all you people dressed up out there makes us know were at the best festival in the world, this is how we wanted everyone at our last tour but no-one dressed up, thank you Isle of Mike' which is what the island was renamed by the Beastie Boys. Their Saturday performance was a bit lackluster to be honest until the last two songs 'Intergalactic' and the now legendary 'Sabotage' turn the crowd into frenzy! Sunday was billed as a gala event and instrumental only but they soon dropped that to play hits they didn't manage to perform the night before, much to the crowds joy, and although it was a better set then their headlining show they once again capped it off with 'Sabotage' which no one can EVER tire of hearing live or on CD.

The surprise of the weekend was a set from ska heroes Madness. Performing a greatest hits set they really were the perfect band for this festival, watching 20'000+ people dressed as Pirates, Wizards, Goblins and anything else their imagination thought up, jumping around to 'House of Fun' really did make the entire weekend for a lot of people.

Bestival really is completely different to any festival you will ever go too, even if you don't like any of the bands on the bill I suggest you still go for the fantastic atmosphere, nowhere will be able to beat it, this is my second year and I am 110% certain it will not be my last.