The death of THE USED star Bert Mccracken's ex-girlfriend was doubly tragic for the rocker - she was pregnant with his child.

McCracken - who used to date KELLY OSBOURNE - had split with his partner KATE before her fatal drug overdose on 4 July (04), but the pair had mapped out a future together to give their kid the best possible upbringing.

And the pain McCracken has suffered since the tragedy inspired his band's latest album IN LOVE AND DEATH - which includes a tune he wrote for his childhood sweetheart two years ago.

He says, "I think that Kate's death had a huge impact on the way the record turned out. Regardless of how I wanted to put things down, they just came.

"HARD TO SAY is a song I wrote about two years ago, and after Kate died we decided for sure it should go on the record. It means a lot to me because of all the good times I shared with her.

"It's so strange. She was pregnant with my baby. We had decided to keep the baby and try to stay friends and work it out." 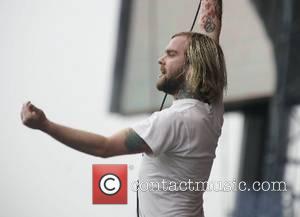