Benji Boko - Where My Heart Is featuring Maxi Jazz Video

UK producer Benji Boko's new single, 'Where My Heart Is' is available to download from iTunes and is taken from his debut album, 'Beats, Treats & All Things Unique', which was released on June20th through Tru-Thoughts Records. 'Where My Heart Is' features British rapper Maxi Jazz, who is most famous for being the lead singer in electronic group Faithless.

The video for 'Where My Heart Is' features Maxi Jazz standing against a white backdrop. Throughout the song, Maxi Jazz faces different angles and is shot in different tones, including black and white. At the end of the video he turns to face the camera.

Benji Boko has built a steady following by touring throughout the UK and Europe, including touring with some of the biggest DJs, such as Zane Lowe, Annie Mac, Beardyman, DJ Yoda and Rob Da Bank. In 2010 he rung in the New Year at London's O2 Arena alongside Calvin Harris, Deadmau5 and Justice and a crowd of 17,000. Benji Boko has also performed at a wide variety of festivals, including Glastonbury, Bestival, Rockness, Reading Festival, Ibiza and V Festival.

His debut, 'Beats, Treats & All Things Unique' has garnered critical acclaim and has had a positive reaction across the BBC Radio network. As well as all of this, Benji Boko will also be remixing for the aforementioned Beardyman, as well as Kidda and Fatboy Slim.

Benji Boko - Where My Heart... 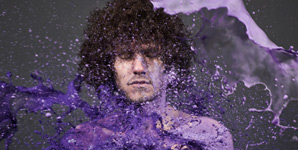 Benji Boko - Where My Heart Is featuring Maxi Jazz Video