What makes a good singer/songwriter? If you take into consideration any singer/songwriters currently in the charts then it's an ability to almost hold a tune and a reasonably attractive look, if you float in indie circle then it's normally heart on the sleeve lyrics and a lack of support artists. Benjamin Shaw clearly floats amongst the latter, with his solitary follow-up to debut EP I Got The Pox, The Pox Is What I Got packed with raw lyrics, an acoustic guitar and noisy sound effects. 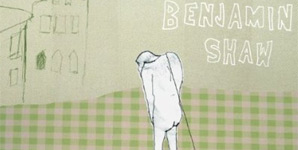 Hailing from the glitzy streets of Blackpool before moving to London, Shaw's work evokes influences from the likes of Sparklehorse and Bonnie Prince Billy that is that his songs are largely clouded in despair and a lonely musical backdrop. Purposely lo-fi, Shaw does desolate sounding songs as well as he conjures up light-hearted album and song titles in otherwise dismal surroundings.

Following on from the introductory title number, 'How to Test the Depth of a Well' is a great test of his strength as both a singer and musician. Whilst his voice supposedly acts as the focus of the song, with dispiriting lyrics such as "well you shouldn't waste your time on living/if there's nothing in it for you" exposing the listener to an overcast forecast of life, the miscellany of his musical accompaniment almost sounds uplifting. The mangled strings and marching drums make the song strangely warmer at first glance, yet this is by far the most accessible the album gets.

We've all heard depressing singer/songwriters before and Shaw runs the risk of joining the pile of wannabe Elliott Smiths least he have a niche angle. The Englishness of some of his songs, such as the brilliantly titled 'Somewhere Over the M6' and the line "and you shouldn't blame it on the Tories/even if they're fowl," distinctively portrays his wit and dark humour in a genre in need of a playful spark. These elements fit in seamlessly with his relatively monotone singing style and serves as a key strength of his, however his real strength as an artist lies more with his musical choices than his choice of lyrics. With dashes of piano, hints of viola and melodic layering particularly on the track 'Home,' Shaw somehow injects a warm sensation into the otherwise drab world the album inhabits.

His style isn't anything special, yet Benjamin Shaw offers enough personality and a few touches of novelty into his music to make it seem worthwhile. Feel free to come for the melancholy and the delicate melody, but stay for the sense of humour and the understated flair.