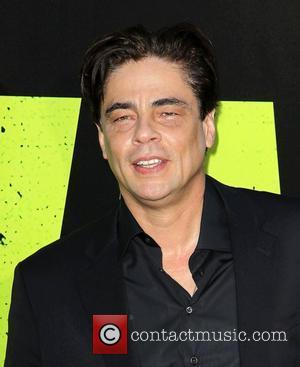 Actor Benicio Del Toro felt "uncomfortable" prior to shooting Fear And Loathing In Las Vegas after author Hunter S. Thompson told him he wasn't "good enough" for the movie.
The Che star teamed up with Johnny Depp for the 1998 cult favourite, based on the writer's 1971 book of the same name.
Del Toro was put through his paces by Thompson before the shoot, and later found out he was being tested over his suitability for the role.
He tells Britain's Shortlist magazine, "I remember my first meeting with him and Johnny Depp before we started shooting Fear And Loathing... It was really uncomfortable. Hunter started... testing me.
"He was saying to me, 'I don't think you can be in this movie. I don't think you're good enough. You don't really understand the character.' I turned to Johnny and said, 'Is he for real?' Johnny was like, 'Relax, he's testing you. He did the same thing to me.' It was like an initiation. But we became good friends after that. Hunter was really special. I think he was the first true genius I've met."