Cumberbatch stars as Turing, a war hero demonised by the people he helped save 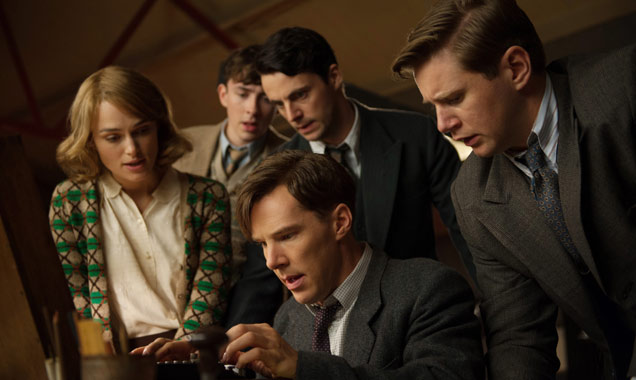 The Imitation Game,’ tells the story of the life and work of one of Britain’s war heroes, Alan Turing. But Turing wasn’t a soldier battling on the front line, a pilot-navigating dogfights in the air or a medic dealing with severed limbs – he battled against insignia and encryption to break down the Nazi code, providing the Allied forces with an invaluable asset.

But Turing wasn’t just underappreciated for his work during the war. Convicted – yes, convicted -of homosexuality in 1952, he was subjected to chemical castration to avoid prison time. Turing would later committed suicide.

In addition to the ones you can see here, Empire have two exlusive snaps. One sees Benedict Cumberbatch as Turing alongside Charles Dance as Commander Alastair Denniston - a fellow decrypter who played a huge role in assisting Turing’s efforts to break the Nazi code. In the background is Mark Strong, who plays legendary MI6/SIS head Stewart Menzies. The second photo sees Cumberbatch in a scene with Knightley who plays Joan Clarke - a co-worker, close friend and former fiancée of Turing’s.

“It is such a complex story,” explains Tyldum to Empire Magazine. “It was the gay rights element, but also how his ideas were kept secret and how incredibly important his work was during the war, that he was never given credit for it.”

The film is based on Andrew Hodges book, “Alan Turing: The Enigma.” Amazon’s description of the source material is as follows:

“Hodges tells how Turing’s revolutionary idea of 1936–the concept of a universal machine–laid the foundation for the modern computer and how Turing brought the idea to practical realization in 1945 with his electronic design. The book also tells how this work was directly related to Turing’s leading role in breaking the German Enigma ciphers during World War II, a scientific triumph that was critical to Allied victory in the Atlantic. At the same time, this is the tragic story of a man who, despite his wartime service, was eventually arrested, stripped of his security clearance, and forced to undergo a humiliating treatment program–all for trying to live honestly in a society that defined homosexuality as a crime.”