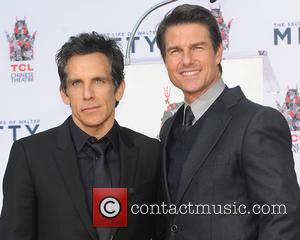 Ben Stiller has revealed he slept poorly on Monday night (02Dec13) because he was worried no one would turn up for his hand and footprint ceremony in front of the TCL Chinese Theatre in Hollywood on Tuesday (03Dec13).

The funnyman admits he was stunned when he was asked if he'd be interested in making his mark in cement on Hollywood Boulevard alongside Tinseltown's greatest names past and present - and had nightmares that he'd be all alone on his big day.

But he needn't have worried - as scheduled, one of the movie world's biggest stars, Tom Cruise, was there to salute him.

Stiller joked, "I was very nervous, it is one of those things you get a little bit tight for because it is a once-in-a-lifetime thing that you don't want to screw up.

"To just look out there and see the faces of the friends and family who showed up and that people actually came is nice. You have that nightmare that nobody is going to show up but I had the Tom Cruise insurance policy, which was great."

The two stars teamed up on the big screen in Tropic Thunder and Cruise had a big tribute planned for his friend.

He told the crowd, "I know Ben and I know what it takes to do what he does and the commitment that he brings, the love of cinema, the love of storytelling and the love of entertaining an audience. When you see his movies you have no idea how much this man cares."

Stiller added, "This is like a weird surreal dream. I am here at the Chinese Theatre, I'm getting my handprints in cement, Tom Cruise is there, Michael Jordan comes out and does a slam dunk over a Lamborghini, the Beastie Boys dedicate a song to me and (actress) Cheryl Ladd pops out of a cake; that is usually how the dream ends.

"I'm humbled and I'm touched and I'm very proud to know that wherever I go and long after I am dead my footprints will be here in Hollywood, being stood on by a fake Shrek posing with tourists for a dollar."