What Does 'Live By Night' Actually Mean? Ben Affleck Explains...

He plays an 'outlaw' in his latest movie.

Ben Affleck's latest directorial venture is a gangster thriller based on the 2012 novel 'Live By Night' by Dennis Lehane. It's all about a man who decides that he isn't going to live by anyone else's rules anymore and decides to take on a mob boss with the help of the latter's girlfriend. 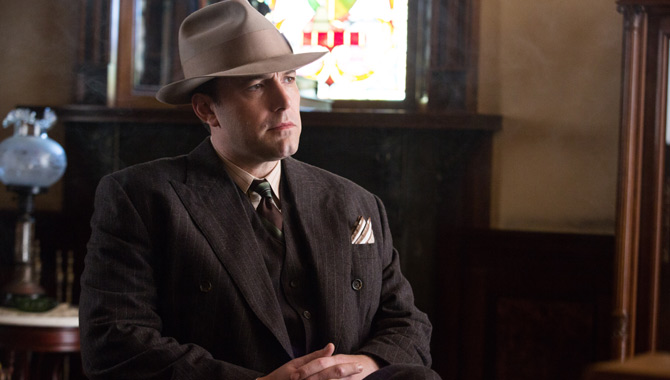 Ben Affleck directs and stars in 'Live By Night'

'Joe Coughlin starts off as a guy who goes to the First World War as a believer [but] he becomes very disillusioned after that war, it was purposeless really', Ben explained. '[He] decides he's not going to take orders from anybody and he's going to become an outlaw. So he takes up a life as an outlaw and lives that way, living by night, for a period of time.'

But what does 'live by night' actually mean?

Watch the trailer for 'Live By Night' here:


''Live by night' means living by your own rules, living by your own set of morals, unfettered by how you would live by day where you have to follow all the laws and rules and that sort of thing', says Ben. 'Dennis Lehane posits that there is a price for living by night and that's what the movie is about.'

There's an air of vintage mafia movies to Ben's latest film, which also stars Zoe Saldana and Elle Fanning, and he took that element and gave it a contemporary makeover for 'Live By Night'. 'I've been watching a lot of gangster movies from the 30s and 40s and really getting into the genre and, as luck would have it, at the same time Leonardo DiCaprio's company sent me this book to take a look at', he revealed. 'I thought this fits right in with this mould of film that I've been really appreciating and admiring and I thought it would be great to try and make a love letter to classic 30s and 40s cinema but speaking in modern contemporary language.'