What do we make of Ben Affleck or more importantly Neil Patrick Harris?

Ben Affleck’s latest movie Gone Girl doesn't hit cinema’s until October, but that hasn't stopped us from already getting excited. In the thriller Affleck plays a husband who comes home on his fifth wedding anniversary to find that his wife is missing. The film’s first full length trailer has just been released, giving us the first real idea of how Gillian Flynn’s story will play out on the big screen. While we still have no idea whodunnit, there’s still plenty to learn from the Gone Girl trailer.

The trailer opens with Affleck’s character Nick Dunne being called ‘the most hated man in America right now’, before being asked, “Did you kill your wife?” It’s the question which is at the center of this gripping thriller. Could a man such as Affleck’s character, one who’s intelligent, handsome and on the surface a total catch, really be capable of killing his wife?

One question the trailer does answer is how the movie would tackle telling Nick and his wife Amy’s (played by Rosamund Pike) backstory. It seems their story will unfold through flashbacks based on Amy’s diary entries. We hear Amy saying she will “practice believing my husband loves me, but I could be wrong”, letting us know that the Dunne’s marriage may not have been all that it seemed from the outside.

As suspicions turn to Affleck’s character, we get a look at how modern day crime suspects face a trail by the media, as everyone seems to start pointing their fingers at Nick. Missi Pyle even appears ask a Nancy Grace-esque interviewer saying that “the hallmark of a sociopath is a lack of empathy.” before we’re shown Affleck’s smiling face.

Then there’s Neil Patrick Harris. Though we don't see much of the former ‘How I Met Your Mother’ star in the trailer, it’s clear his character is another mystery which needs working out. We never thought we’d say this, but Harris’s character looks so creepy, he makes even Barney Stinson at his worst appear like a thoroughly decent guy. He even makes the sentence “I just wanted to help” seem positively chilling.

More: Everything you need to know about Gone Girl

As we hear Amy say she is “frightened of her own husband”, we’re left seriously wondering if indeed Nick is just a ruthless killer who murdered his own wife. Even Amy’s parents seem to turn on him, however he does have backing from his lawyer, played by Tyler Perry. As Amy’s words of “this man may kill me” ring out, we’re left truly wondering who to believe. 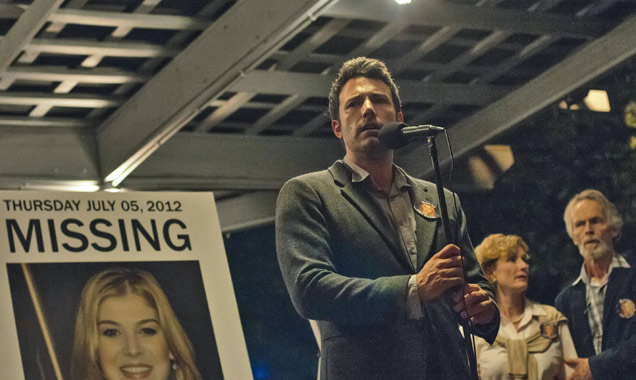 Can you trust Ben Affleck?

Gone Girl presents a mystery which deserves to be slowly unraveled. The trailer gives little away other than the basic plot and is careful not to expose any of the movie’s twist and turns. But from this two and a half minute preview we’re already completely enthralled. What happened to Amy? Could Nick really be responsible? Who is Neil Patrick Harris’s character and why is he so damn creepy? We’ve got so many questions swirling through our brains that we might not be able to last until October 3rd. But we can answer one question, is Gone Girl going to be everything we hoped for? Judging by that trailer we can safely say yes, bring on October 3rd!