Ben Affleck Delighted To Be Neighbours With Matt Damon 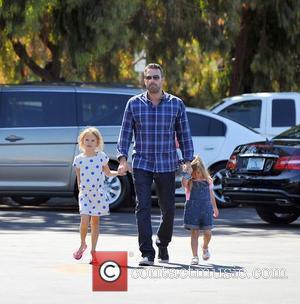 Picture: Ben Affleck with daughters Violet Affleck and Seraphina Affleck out at a Farmer's Market in Brentwood. Los Angeles, California - 12.08.12

Ben Affleck is delighted to be living next door to Matt Damon again after the Bourne star bought a house close to his longtime friend's family home in Los Angeles.
Two actors grew up together in Cambridge, Massachusetts and they spent years living just streets apart, but Affleck has long dreamed of reuniting with his pal in their adopted hometown of L.A.
The Armageddon star's wish has now come true after Damon purchased a $15 million (£9.4 million) house in Pacific Palisades - the neighbourhood where Affleck lives with his wife, Jennifer Garner, and their three children.
Affleck tells the Boston Herald, "We're closer than we were in Central Square (in Cambridge, Massachusetts). We've got the kids back and forth in the yards. The weird thing is, when we imagined hanging out with our kids together, it would be like playing football and baseball. But it's all these girls playing princess!"