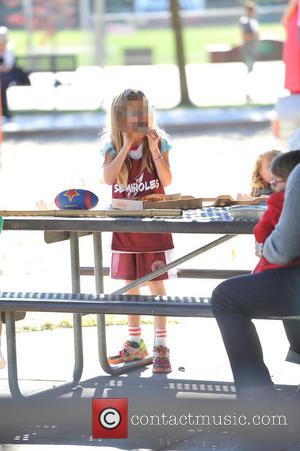 Picture: Violet Affleck - Ben Affleck with his daughters at Palisades Park and Recreation Center pushing on the swings and having lunch with a Rosti Tuscan...

Ben Affleck has blamed the paparazzi who take photos of his daughters leaving school for putting the family in harm's way and alerting a stalker to their whereabouts.

The actor's wife Jennifer Garner launched a campaign earlier this year (13) to force Los Angeles lawmakers to create new legislation that forbids snappers from taking shots of celebrities' kids, and Affleck is proud of her efforts, insisting it's time for the powers that be to protect the children.

And, in a new interview with Playboy magazine, the Argo star reveals shots the paparazzi took of his daughters helped one dangerous individual get too close.

He explains, "They used to take pictures of our children coming out of preschool, and so this stalker who had threatened to kill me, my wife and our kids showed up at the school and got arrested. I mean, there are real practical dangers to this.

"You can yell at me with a video camera and be Tmz. You can follow me around and take pictures all you want. I don’t care. There are a couple of guys outside right now. Terrific. That’s part of the deal. But it’s wrong and disgusting to follow children around and take their picture and sell it for money. It makes the kids less safe."

Garner's efforts to change California law and penalise snappers was a big success and Senate Bill 606 comes into effect on 1 January (14). Under the new legislation, photographers who harass the children of stars face a year behind bars and hefty fines.