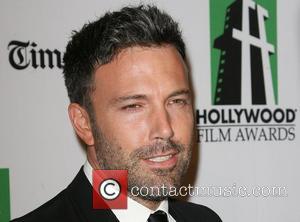 It might not be Oscar season yet but Argo has already started filling up the trophy cabinet. At the 16th Annual Hollywood Film Awards Gala, the cast of Argo – which includes Ben Affleck, Bryan Cranston and John Goodman – were honored with the Hollywood Ensemble Acting Award. The event was held at the Beverly Hilton Hotel in Beverly Hills, California, yesterday (October 22, 2012), Examiner.com reports.

Ben Affleck leads the ensemble cast in this dramatic thriller, based on the true events of November 1979, when militants stormed the US embassy in Tehran, during the height of the Iranian revolution. 52 Americans were taken hostage but in the chaos, six Americans managed to escape. They sought refuge in the home of the Canadian Ambassador Ken Taylor and the CIA are asked to intervene.

The movie has received high praise since it debuted at the Telluride Film Festival in August 2012 and already, Oscar nods are being bandied about, with many claiming that this is Ben Affleck’s finest work to date. It’s received a 95% score rating on the Rotten Tomatoes site and such glowing reviews will surely serve Argo well when it comes to awards season at the start of next year. Peter Travers, writing for Rolling Stone, seemed to sum up the general attitude towards Argo, pretty succinctly: “Ben Affleck doesn't merely direct Argo, he directs the hell out of it, nailing the quickening pace, the wayward humor, the nerve-frying suspense. There's no doubt he's crafted one of the best movies of the year.”