Review of Broadside Album by Bellowhead

With every album Bellowhead release, they raise the barrier. Broadside, Bellowhead's fourth full-length offering, complete with their trademark infectious folk-funk stomp, juicy, eclectic arrangements and almighty appetite for entertainment, does it yet again. 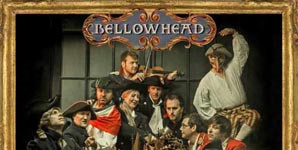 'Byker Hill' opens with a steady string arrangement before Jon Boden's distinctive vocals join with the eclectic Bellowhead ensemble of instrumentation. The track continues with folk fiddle and accordion sounding clear amongst the blend which is underpinned with their trademark distinctive sousaphone/helicon bass line. With a later interjection of rock moodiness with what sounds like chugging distorted guitars, the track has something of a more menacing, moody edge. This rock edge and construction is also echoed in 'Old Dun Cow'; the track opens with a bass clarinet and sousaphone riff accented by stabbing higher brass which is then joined by the wider blend and thudding drums but seems to nod to a more aggressive and punching rock construction. There's then an almost classical sounding oboe and strings interjection amongst the sturdy and foreboding roar of the remainder of the track before it blasts into a more up-tempo funk groove, sax solo and dramatic conclusion. Bellowhead always have interesting takes on traditional tracks, and the same individuality with originals, with focus being as much on arrangement as on melody. Opening with a traditional undulating, double-stopped violin line then joined by the rest of the band, 'Roll The Woodpile Down' is a fantastic example of Bellowhead's infectious toe-tapping folk-funk fusion which certainly contributes to making their eclectic yet intricate arrangements sound so fun!

While '10,000 Miles Away' is a more traditional folk song with precisely picked banjo accompaniment and emphatic brass backings with the kick of a well-produced pop/funk track, 'Betsy Baker' has a steadier pace and the slightly more sedate feel of a love song with a typically strong almost orchestral arrangement and powerful harmonies. This is contrasted again by 'Black Beetle Pies'; from its xylophone and clarinet opening, 'Black Beetle Pies' leads into a playful track with distinctive glockenspiel and xylophone accompaniment sounding clear amongst the usual eclectic blend, and carries a real feeling of mischievous playfulness. With 'Thousands Or More', Bellowhead then kick right back to that characteristic, crowd pleasing, infectious stomp interspersed with smooth, slushy-string accompanied verses; in fact, the slushy and powerful instrumental builds the track to a wonderful climax then gentle close before the more traditional fiddle-led folk stomp of the instrumental 'Dockside Rant'.

With 'The Wife Of Usher's Well' and 'What's The Life Of A Man', we get another whiff of this air of menace that Bellowhead have picked up for this album; the former, a dramatic contrast to 'Dockside Rant' which precedes it, sounds a hauntingly foreboding drive with collective vocal melody, whilst 'What's The Life Of A Man' crashes in with the determination and regal air of a military brass band before the track continues into a haunting, chopping and changing, vaudeville-inspired effort. 'Lillibulero' follows with traditional call and response verses and chorused tongue-twister choruses, and the album concludes with the slower, steadier paced 'Go My Wife' with its rich, string heavy, almost orchestral arrangement.

There's never a dull moment on Broadside; another fine effort from the folk-funk 11-piece. 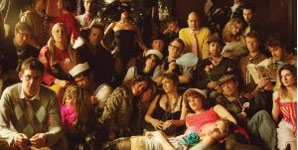