Bella Thorne: Harry Styles Would Be Great In Shake It Up

Bella Thorne wants Harry Styles and his One Direction bandmates to appear in her and Zendaya Coleman's 'Shake It Up' TV series following in the footsteps of Tyra Banks and Cat Deeley. 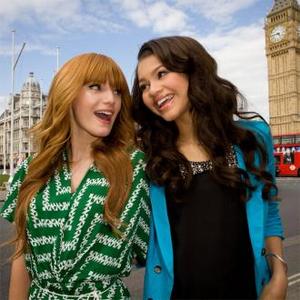 Bella Thorne wants Harry Styles to appear in her and Zendaya Coleman's 'Shake It Up' series.

The 14-year-old star plays CeCe Jones in the original Disney series alongside Zendaya (Rocky Blue), and they would love to see the 18-year-old One Direction singer and his bandmates - Zayn Malik, Louis Tomlinson, Niall Horan and Liam Payne - follow in the footsteps of Tyra Banks and Cat Deeley by appearing in the sitcom.

Bella exclusively told BANG Showbiz: ''I think One Direction. I love Harry Styles and I love all of them, I think they're all super awesome. I think all girls that I know love them, they're all kissing Harry Styles posters.''

The Disney singer stars - whose 'Shake It Up: Live 2 Dance' music album is out now - count the late Michael Jackson and Beyonce Knowles as their biggest influences, and they are particularly in awe of how the former Destiny's Child star has risen to fame ''with such grace''.

''And then Beyonce because she's truly talented in every aspect of entertainment and she's done it with such grace and poise, that's not easy to do.''

'Shake It Up' airs on the Disney Channel every day.