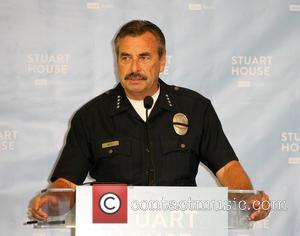 Picture: LAPD Chief Charlie Beck - The Rape Foundation holds a groundbreaking ceremony for the construction of a new facility for the Stuart House progra -...

Rocker Beck pulled double duty at his concert in Detroit, Michigan on Saturday (28Jun14) by opening the show himself after Sean Lennon's group cancelled their supporting gig at the last minute.

Lennon's The Ghost of a Saber Tooth Tiger have been serving as the opening act for Beck's ongoing North American tour, but they were a no-show at the Fox Theatre show in Detroit amid rumours of border crossing issues following the previous night's (27Jun14) stop in Toronto, Canada.

However, the Loser hitmaker decided to make the most of the extra stage time and announced to the crowd that he and his band had decided to "open for ourselves".

Beck reworked his show into two parts and kicked off the gig with acoustic renditions of tracks like The Golden Age, Morning and Dead Melodies, before filling the second half of the concert with more uptempo cuts, including Devil's Haircut, The New Pollution, Loser and E-Pro.

The Ghost of a Saber Tooth Tiger are expected to rejoin Beck's tour on Monday (30Jun14) to play New York's Hammerstein Ballroom.