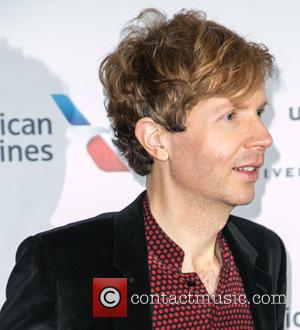 Rocker Beck is refusing to get mad about Kanye West's Album of the Year attack at at Sunday's (08Feb15) Grammy Awards, because he thinks the rapper is a "genius".

The Stronger hitmaker almost repeated his infamous stage invasion at the 2009 MTV Video Music Awards - when he interrupted Taylor Swift to defend his pal Beyonce's honour - as he pretended to take the mic when Beck's Morning Phase picked up the coveted prize over Beyonce's acclaimed self-titled record.

He laughed and returned to his seat, but later told E! News, "I just know that the Grammys, if they want real artists to keep coming back, they need to stop playing with us... And Beck needs to respect artistry and he should've given his award to Beyonce."

When asked about West's actions while he was accepting the trophy, Beck admits he would have stepped aside if West wanted to say something.

He tells Us Weekly, "I was just so excited he was coming up. He deserves to be onstage as much as anybody. How many great records has he put out in the last five years, right?

"But you can't please everybody, man. I still love him and think he's genius. I aspire to do what he does."

And humble Beck agrees Beyonce should have taken the top prize: "I thought she was going to win. Come on, she's Beyonce!"