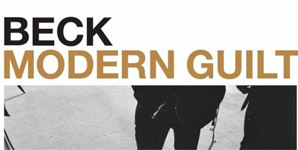 Becks albums are anything but boring or straightforward, in fact some of his admirers call themselves Beck 'experts', and it's fair to say they are just that, as not one of his albums is the same or follows a pattern.

Modern Guilt is the title of album number 13. This album takes the funkier side Beck's writing and infuses it with a superb 60s rock feel, and remixes the noughties into it. Not only are we given Becks wonderful imagination, this time he's also worked with super producer, Danger Mouse and what a welcome addition he is, for anyone who isn't a Beck expert or superfan, Modern Guilt is a brilliant introduction into his music. Guero released in 2005 was quite a commonplace recording for him where 'The Information' appeared to be more of a gimmick than quality writing.

Danger Mouse has really honed Becks sound and created a really interesting album to listen to. The album recollects some of his best work including sounds on Mellow Gold and Odelay. Standout tracks include the title track and 'Walls', perhaps two of the best songs of his career.

It's these petite, discrete chunks of genius the rest of us used to like about Beck.