Review of Chemtrails Single by Beck

Read our single review of Chemtrails by Beck released through Interscope. 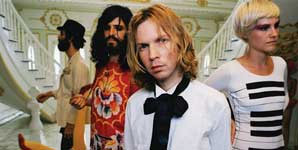 If you can't beat 'em you might as well join 'em, or so they say. Following on from the likes of Radiohead and Nine Inch Nails in giving away new music gratis via the web comes Beck, fresh from working with esteemed producer and joint-head honcho for Gnarls Barkley, Danger Mouse.

Proving himself to be the most chameleonic solo artist of the past two decades, 'Chemtrails' is no different in that its almost an about-turn in direction compared to his most recent material and totally unexpected from someone who many thought had gone past his re-invention sell-by date many moons ago.

Coming on like The Flaming Lips covering The Monkees 'Porpoise Song', 'Chemtrails' is the return to form we'd all been praying for since..ooh, 'Seachange' maybe, and could quite easily have been lifted off 1994's 'Mellow Gold', such is its laidback groove and penchant for slacker (im)morality.

As a taster for the forthcoming 'Modern Guilt' long-player, 'Chemtrails' will have you subscribing to iTunes and pestering your local record store in an instant. Yes, its that good.
Welcome back Mr Hansen, it's been a long, long time.