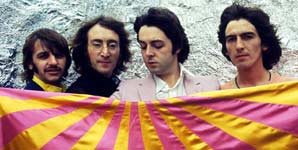 Apple Corps Ltd/Capitol Records are to release the Beatles Love album in stereo and 5.1 November 21st. This will be the first Beatles album available in 5.1

After being asked by the remaining Beatles, Ringo and Paul, along with Yoko Ono Lennon and Olivia Harrison, to make experimental mixes from their master tapes for a collaboration with Cirque du Soleil, Sir George Martin, The Beatles legendary producer, and his son Giles Martin have been working with the entire archive of Beatles recordings to create LOVE. The result is an unprecedented approach to the music. Using the master tapes at Abbey Road Studios, Sir George and Giles have created a unique soundscape. The release of this album, which is also featured in the Cirque du Soleil/Apple Corps collaborative production of the same name at The Mirage in Las Vegas, has been much anticipated.

"This album puts the Beatles back together again, because suddenly there's John and George with me and Ringo," said Paul McCartney. "It's kind of magical."

"George and Giles did such a great job combining these tracks. It's really powerful for me and I even heard things I'd forgotten we'd recorded." commented Ringo Starr.

"The album has the feeling of love and that's why the title is Beatles LOVE," added Yoko Ono Lennon, "They have let everything that is beautiful and daring come out."

"The music is stunning. I think the most amazing thing about it is that you can pull it apart and find that all the elements carry with it the essence of the entire song," said Olivia Harrison.

The Beatles - Words Of Love

The Beatles: On Air Live At...