Ringo and Paul explain in the new documentary 'The Beatles: Eight Days a Week - The Touring Years'.

It's been more than 50 years since The Beatles took the world by storm, and the phenomenon that was their day-to-day lives is to be explored in yet another exhaustive documentary called 'The Beatles: Eight Days a Week - The Touring Years', featuring fascinating archival footage and some new interviews.

Re-discover The Beatles in 'Eight Days A Week'

The surviving two members of this influential pop band, Paul McCartney and Ringo Starr, invited director Ron Howard into their past to talk about the insanity that was Beatlemania, their democracy as a group and just how they managed to create sounds that no-one ever heard before.

'Tomorrow Never Knows' was a track written by John Lennon for their 1966 album 'Revolver', and it is largely noted for its use of tape loops. There's a backwards guitar solo in it, and the harmony is almost exclusively restricted to one chord. But how did the Beatles manage to get that unique, warped sound?


John was not mechanically minded', Ringo Starr explained in an interview for the movie, describing how his bandmate struggled to play a tape that had not been rewound in the studio. 'The tape had run off to the other reel and he put it on like it was the start but it was the end of the song.'

However, as it happens, the band members were rather impressed with the effect. 'He brings it out like, 'Wow, you've gotta hear this!' And we said, 'Great, we've gotta do that!' so call in the boffins', Ringo continued. 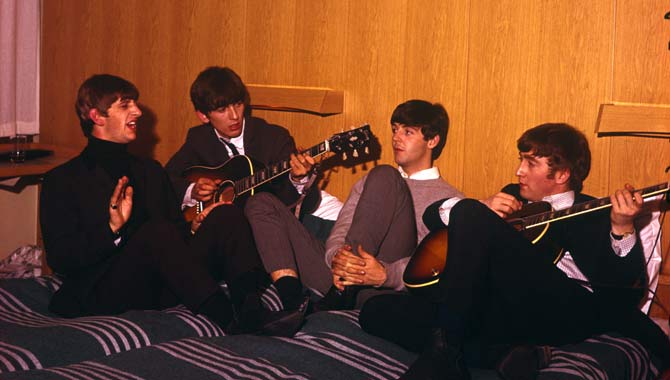 Ringo and Paul open up about their time with The Beatles

Paul remembers playing the song to Brian Epstein and George Martin for the first time. 'You could see the puzzlement going across their faces', he said. 'But instead of saying, 'Come on guys, I think you've really got to put another chord in', he knew to leave us alone by then.'

'The proof is in the pudding; it worked really well', Ringo adds.

'The Beatles: Eight Days a Week - The Touring Years' is set to be released in theaters on September 15th 2016.