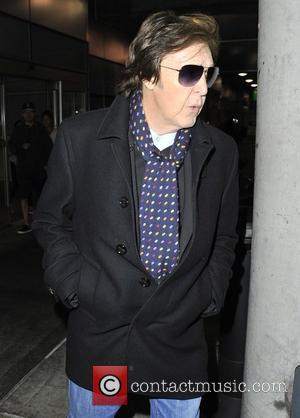 Former Beatles stars Sir Paul McCartney and Ringo Starr are among the musicians who have donated songs for a new Hurricane Sandy benefit album.

The music icons will feature on the new Songs For Sandy compilation, along with Ben Folds Five, Dave Stewart, Jeff Lynne, Joe Walsh and Eric Burdon, among others.

Donating I've Got a Feeling to the charity album, MCCartney, who was one of the artists who performed at December's 12-12-12 The Concert for Sandy Relief benefit in New York, says, "In the wake of the devastation it is good to know that so many people are getting together to provide relief for those whom have suffered most."

While Starr writes, "I want to thank everyone for what they are doing. This is how Peace & Love works. Well done Green Ground Zero, Occupy Sandy & Restore Red Hook. Peace & Love, Ringo."

And former Eurythmics star Stewart adds, "I have so many friends and workmates still struggling with the aftermath of Sandy , I've seen their photos and heard their stories and it's heartbreaking.

"I chose to donate my song Just A Matter of Time as it has a chorus affirming that time will heal, but the verses resonate with the loss that has occurred in every way to the victims of Sandy, both personally and as whole communities."

Meanwhile, former The Animals frontman Burdon has donated the traditional Tishomingo Blues to the project and Elo star Lynne has offered up "a brand new electric version of Save Me Now", adding, "It's a song I wrote 22 years ago about this very subject - global warming and the need to listen and be kind to our planet. I wanted to contribute to Songs After Sandy because I feel terrible about what happened, and my heart goes out to all of the people still stuck in it and trying to work through it."