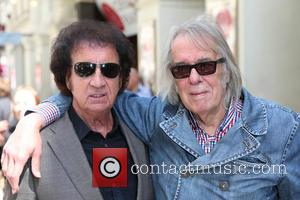 Picture: David Stark and Tony Bramwell - Brian Epstein honoured with Blue Plaque at the site where Epstein's company NEMS occupied offices from the height of...

Legendary Beatles manager Brian Epstein has been honoured with a special blue plaque tribute in London.

Eighties pop star Adam Ant and British actor Andrew Lancel, who portrayed the music mogul in biographical stage play Epstein - The Man Who Made the Beatles in 2012, were among the guests who attended Sunday's (29Jun14) unveiling at Sutherland House, where he ran his NEMS Enterprise management company.

Epstein, who is frequently referred to as the "Fifth Beatle", died from a drug overdose in 1967. The new Rock and Roll Hall of Fame inductee would have turned 80 this September (14).

The blue plaques are placed by officials from The Heritage Foundation to mark significant historical sites across the U.K.