With their roots in the rundown, nowhere town of Swindon, Wiltshire, Beatbullyz are unlikely upcoming stars, let alone the UK's answer to the Black Eyed Peas as the Guardian suggested back in 2009. Look past the N-Dubz-like, too-cool-for-school 'z' and band members' aliases Bully, Bozo, Yoyo, Disco and Philonious Funk, however, and it's clear that Beatbullyz actually are a talented bunch creating undeniably catchy music for the masses.

'Golden City' opens with a smooth string intro and then builds in a similar synth-ridden, electronic dance pop vein to the likes of Friendly Fires and MGMT, intercepted now and again by hefty bursts of Dizzee-esque rap. It, like much of the album, has a driving, up-beat dance backing track and tight string arrangement creating an overall sound that blends elements of club dance, hip hop, and chart pleasing synth-pop giving this Wiltshire collective the potential to be accessible to a wide audience; Beatbullyz tunes so easily ingrain themselves even after a first listening. 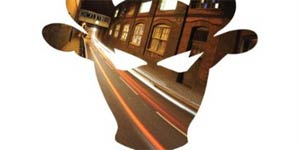 'Bounce', again with a heavy flavour of Dizzee, will inevitably induce synchronised pogo-ing from hyperactive teenagers and popped up students across the country in sticky floored music venues and students' unions alike. While moving onto track three, we get yet another side of Beatbullyz in 'How The Story Goes', a pop song through and through which bears great resemblance to Take That's 'Shine', especially in the boy band backing vocals which are also heard later on 'Keys To Life'. Again, it's flavoured with the 'Bullyz fast becoming trademark spoken word stamp and twist of synthesised brass gives the track another Mika-esque pop boost. Drawing in yet another influence, Beatbullyz hint at Bloc Party with the delayed guitar and pounding drums of title track 'Human Nature'. The highlight track of the album, 'Human Nature' also builds to a euphoric pounding chorus with soaring vocals over a pulsing dance groove.

The trance synth opening to 'Starlight', on the other hand, could actually be the opening to Mr Hudson's 'Supernova'. Rapping about trying to do their mothers proud may not be so "cool" but Beatbullyz' conviction to their cause regardless of what others may think is commendable. It's an ongoing theme running through 'Human Nature', inspiring to younger listeners and endearing to old? Moulding themselves almost into life coach mode, Beatbullyz' lyrics may well appeal to their teenage following acquired from past tour buddies N-Dubz and future tour mates JLS, Beatbullyz' lyrics talk of success, hopes and fears. Lyrically they're perhaps immature, with writing that's ridden with tedious rhymes and not nearly as well done and in control as their near perfect production, as the verses of opening track 'Golden City' prove; every line of the verse rhymes (two, you, blue, too). The concluding track even features a guest appealing to their teenage audience; Heartbeat features the smooth and youthful Goulding-Lott vocals of Twilight star Robert Pattinson's sister Lizzy.

Beatbullyz debut, 'Human Nature', is a good all round album that will, perhaps unwittingly, appeal to a range of people by means of down-right irresistibly catchy tunes. Fair play.