Type the words Beat Connection into Google or any other search engine and you'll be met with several links to a Norwich based covers band specialising in weddings, parties and corporate events. Now, we're not saying that Google or its bastard offspring Wikipedia is the font of every music hack's knowledge but when four minutes of dancefloor hedonism land unsuspectingly on the doormat by a group of artists with a profile as anonymous as that of Lord Lucan, one has to start somewhere. 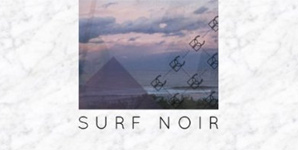 The single in question happened to be 'Silver Screen', a transcendental mix of high-octane techno and lo-fi eloquence that carried its own pop undercurrent for good measure. New Order comes to mind, but then so do last year's chillwave hierarchy of Toro Y Moi, Washed Out and Neon Indian while all the time, 'Silver Screen' holds its own in a remarkably fresh and invigorating manner. Its creators take the form of a Seattle based duo whose values on production and technique hold no boundaries.

Enter Jordan Koplowitz and Reed Hunter, a couple of self-confessed music nerds in thrall to all things pop, yet intrinsically with a leftfield twist. What this means is shimmering techno, hallucinogenic ambience and the occasional burst of surf twanging melody conjured up from a vast studying of all things ranging from Brian Wilson to Baaba Maal.

Formed in Seattle little over a year ago, the 'Surf Noir' EP initially surfaced via Beat Connection's own Bandcamp website towards the back end of 2010. Now, thanks to the blogosphere and a healthy collection of tunes fit for dancefloors of varying shapes and sizes, Moshi Moshi have taken a gamble in adding them to their impressive roster and if this first excursion into the unholy chagrin of being recording artists is anything to go by, its one that potentially should reap dividends.

The real highlight here, 'Silver Screen' apart, comes in the form of 'Theme From Yours Truly', where Beat Connections real intentions as challengers to Cut Copy and M83's status as leaders of shoegaze inspired dance music come to the fore. Pre-emptive in its build-up, the incessant rush of furious synths coupled with an almost Daft Punk like appetite for holistic interpretation make this the unexpected techno monster 'Surf Noir' never advertised on its tin.

Of course there are downsides here, most notably in the shape of 'Wildheart' and Fresh Touch', both passers-by rather than interludes that serve little purpose other than to weld songs together. Nevertheless, by the time a third inconsequential piece ('Motorway') stretches the limits after 'Silver Screen', 'Same Damn Time' closes the EP in fine style, its pensive pulse littered with stuttering beats and jarred handclaps that maybe suggest Beat Connection's infatuation with Bob Stanley and Saint Etienne is dangerously for real.

As introductions go, 'Surf Noir' is better than most, and as a result we await Beat Connection's soon-to-be debut long player with baited breath.