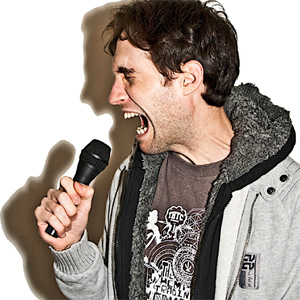 Darren Foreman, more commonly known as Beardyman, is the 2006 and 2007 UK beatbox champion renowned for his ability to create abstract sounds using the human voice, which he manipulates to create compelling modern dub step and drum & bass.

Referred to as "Deus Ex Barba" (Latin for 'God of Beards'), Beardyman has obtained himself a cult following with his quirky, unique musical beat boxing and often insightful yet humorous talks.

Beardyman talks to us about his latest technological advancement, the Beardytron 5000, the sounds of the 21st Century and the danger of Facebook!

CM: Hi Dan, thanks for doing this! How are you?
Darren: That's awesome. Not too bad.

CM: Could you describe your participation in London Campus Party?
Darren: So. London Campus Party is a technology and technology skills based event. It's sponsored by O2 and takes place in the O2 centre. My involvement is to make a track which encapsulates the 21st Century. We're going to put the track on my social media site and then I'm going to perform it at the Campus Party.

Basically, the idea at first was to ask people what they thought the sounds that encapsulate the 21st Century were, and the stuff we got back was kind of, crap. We figured out there's a reason why no one's engaging with the idea of 'What are the sounds of the 21st Century?' - because there aren't any. If you said "What are the sounds of the 20th Century?" you could say "Oh, it would be a train noise, a steam engine, a car, an aeroplane, a rocket taking off or guns" but there really haven't been any technologic advances in the 21st Century that encapsulates what's been important, that make any f*****g noise.

So what I'm going to do is make a track out of these very, very, quiet noises: the tapping of smart phone screens, the tapping of keyboards and the very quiet "wizz noise" an electric car makes when it speeds off. What really encapsulates the 21st Century is the lack of any noise! I think that's an interesting statement and I couldn't think of a more appropriate one.

So what I'm going to do basically is magnify samples of all these silent things like touch screens being pressed, smart phones being turned on and off, laptop's being opened and closed and electric cars starting up and we're going to have a video accompliment to it. All the sounds in the backing track are going to be made from that and I'm actually going to make it using my equipment that I've had built. It's my creation - The Beardytron 5000, which is this ridiculous software based, live looping set up which I just did a Ted Talk on. (http://www.ted.com/talks/beardyman_the_polyphonic_me.html)

CM: We're amazed by the process. It sounds incredibly ambitious but also very intriguing - making music out of very little noise.
Darren: It's funny. It would be more ambitious if I didn't have this flash where I was like, "I know how to fulfil this brief! I'll make it out of silence!"

You can buy CDs of room noise which is various, very subtle room noise created with different microphones in different areas of the room. You don't think when you walk into a room there's much noise going on, but actually, if you gain up the microphone it sounds completely different. If you watch a really well made film where you switch from an outside scene to an inside scene you get very subtle reverb generators to recreate the reverberation pattern of a room. Often what you hear in a film might sound like it was done on location, but it wasn't. That's the kind of noise I'm going to be turning up with a kind of hiss that comes from digital noise. So the digital noise you'll be hearing, and John Cage like attention to silence, that will form the track, will be quite an interesting listening experience and I'm excited to do it.

CM: You mentioned the Beardytron 5000, can you explain what this gives you the ability to do?
Darren: With this Beardytron 5000, I can create drum channel enhances so I can beat box the drum & bass beat, into the drum channel, which will then enhance those drum beats. It has the ability to make the kick drum have more bass and the snare have less bass to a specific frequency threshold. You have all sorts of things going on; the kind of stuff a producer would do when they're producing, but done in a much more instantaneous way.

You can just put white noise through the drum enhancer and as long as there's a broad frequency spectrum you can turn it into a beat based on one of the genres: dub step, drum & bass, hip-hop, house and techno. Ultimately, making a drum & bass beat out of seemingly nothing. It's really crazy! I didn't think I would get to demonstrate the capacity that my system has, ever. And I certainly didn't think I would with this project and it was only because of the proportion of the suggestions we received that made it possible.

I'm going to be able to perform a certain version of [the track encapsulating Sounds of the 21st Century] live which will be insane to see silence, gradually turning into recognisable music.

CM: You're currently recording a selection of EPs - can you describe this process and why you decided to release them spontaneously?
Darren: I'm releasing a five EP project. I've been making music really solidly for about six months now and I've got about two hours of music which I've grouped into five little EPs which are all aimed at a different listening experience.

Originally, I set out to make four EPs: Music for Dancing with Strangers, Music for the Enhancement of Adult Activities, Music for the Enchantment of the Inebriation with Friends and another one called Music. I couldn't pigeonhole things that naturally so I've got one which is an abstract, electronic beatboxing EP which is hard to define.

There's another one which is this mad f***ing journey which starts in space. It sounds like it's recorded on an old VHS, reminiscent of Boards of Canada but a lot more epic and weird. It's like the opening to a film where astronauts are being eaten by aliens and you're just hearing it through the radio. It advances into a space themed mix like dance music - I don't really know what the f*** it is but it's really fun and listenable!

There's a guitar based EP which is more melancholy and more appropriate for listening to on your own. For example, you wouldn't necessarily put Radiohead on at a party.

There's one which is an abstract mix where I wrapped up the BPM varying from hip hop to savage! Why not?!

And finally there's a Balearic one which is very different again.

I didn't mean to do this. It was never intentional but if you're going to sit down and listen to something, you should be able to listen to it in one go.

I'm really proud of the music I have made now!

CM: Do you think technology is being used in the wrong way today, such as the regulation of social networking and surveillance?
Darren: Facebook has become evil - who knew?  They became evil about a year ago when they decided charities and impoverished artists and musicians were now on exactly the same playing fields as massive businesses that have way more budget. If you want to get in contact with your 'fans'/ the people who have 'liked' your page it's much more difficult. They reduce the newsfeed down to a selection based on a sorting algorithm. I've got over 100,000 'likes' on my Facebook but that doesn't mean anything anymore. That means maybe 20% of them will get a post I put out, 10% of them will get a post with a link in it and if I put multiple links I stand even less of a chance of getting through to them. It's very hard for Facebook to be used by artists or charities or people without huge budgets, who still want to get a large amount of exposure. People moved away from the free open web and moved onto one stop shops like Facebook and all the other social media networking sites have taken a back seat.

Money ruins everything and the lust for power and control will ruin everything and Facebook has become the embodiment of everything the web shouldn't be - it's not open, it is controlled from the top down, it is the worst thing the internet has had to suffer and I think that Zukerberg is one of the most dangerous men on the planet, because he has control over our information, over our data, over our social lives. He can advertise in our social life - that's like having a conversation with your friend sponsored by Pepsi or something - it's crazy and literally what's happening. He is an evil f***! It's really serious!

I don't know how we're going to get out of it now, only by other social networking sites being better and people migrating off Facebook, or another NSA scare.

CM: How do you believe we can combat everybody having to acquiesce and doing things that are prescribed to them like Facebook?
Darren: The internet was built specifically upon anarchistic, egalitarian principals. It was built so that you didn't have to pay for specific access to anything. I suppose the nightmare ten years ago was people thought maybe access to certain sites was going to be restricted to if you had money or power.

It's really interesting because there's no legal stature to deal with these things. Existing privacy laws become obsolete because technology is always leading the way for legislation because by definition, legislation is always playing catch up to innovations in society. That's all legislation ever is. Those advances only come about because of innovation. The world is just made of people struggling to cope with technology and Facebook is the biggest danger to our freedom that we have ever faced. I couldn't be more certain about how dangerous I think Facebook really is. I feel like I'm the Jew in 1935 who's suddenly like: "Hang on a sec, maybe all this Jew bashing is for real?"

Weirdly, Will.I.Am came out with a little pearl of wisdom that I read the other day. I couldn't hate his music anymore but he is a really smart cookie and a lovely bloke. He's started to look into further technology and he wants to learn to code because finding good coders is hard. He made a great analogy, he said people who understand code were like "The clergy of old who were the only people who could read" they're like the scribes. It's perfect!

CM: Thank you for your time and impending knowledge. I feel like becoming an activist and starting a revolution!
Darren: (Laughs) Yeah, go out and burn Facebook! 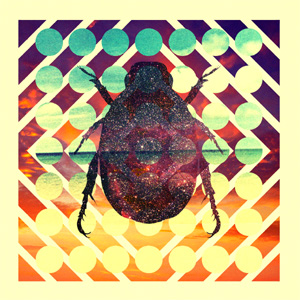