TV survival expert Bear Grylls' seven-year-old son saved a girl from drowning after rescuing her from her stream. 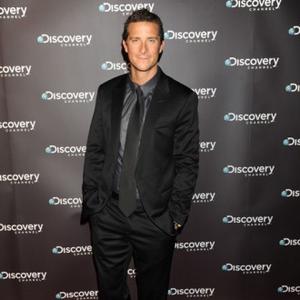 The TV survival expert - who has three children, Jesse, seven, Marmaduke, five, and two-year-old Huckleberry, with wife Sheila - says his eldest boy is already following in his footsteps by coming to the rescue of one of his friends who had fallen in a stream.

He said: "They were in a little base in a stream and she fell in. And - I wasn't there, you know, and the story grows and grows every time he tells me - but he did rescue her and he was proud as punch to have dragged her out."

However, while he is proud of his son, Bear admits he is worried they are too influenced by him and his wild excursions.

Bear - who, in his show, 'Born Survivor', has had to drink his own urine, eat various insects and Parachute from a helicopter - said in an interview with the Daily Mail newspaper: "Their headmaster took me aside and said, 'It's great that they might know how to take the door off a helicopter and deal with a snake bite, but it would be really great if they focused a little more on the mathematics.' I'm kind of feeling that at the moment.

"For a long time, I never wanted them to be too aware of what I do. I relaxed that when all their friends were talking about me in the playground, and they were the only ones not to have seen the programme.

"But getting the balance right is hard. Do I want them to grow up to be me? No, actually. I'm unemployable in The Real World. I don't want that for them."

Bear Grylls Sets Up Camp On NBC With 'Get Out Alive'

Bear Grylls Heads Into The Wild After Discovery Sacking

Into The Wild: Bear Grylls Fired By Discovery Channel