The 70s era set show is set to hit screens next year.

From the man who brought colour to Paris, Australia and fair Verona comes 'The Get Down'; a Netflix Original Series created by Baz Luhrmann which illustrates the lives of four teenagers living in the Bronx in the seventies - with as much vibrancy as you've ever seen from this celebrated director. 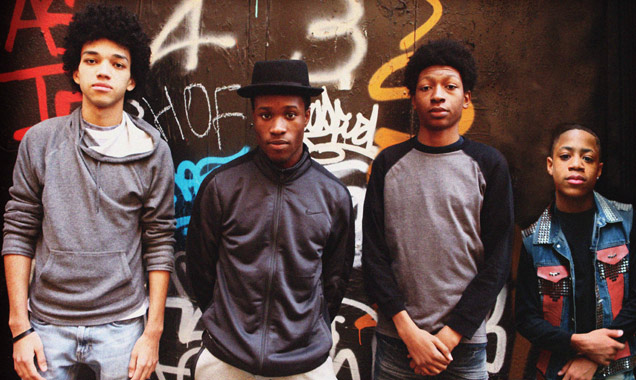 [L-R] Justice Smith, Shameik Moore, Skylan Brooks and TJ Brown star in 'The Get Down'

He's known for bringing a certain iridescent quality to stories for the big screen, but now Luhrmann is settling down for the small screen with his first series: 'The Get Down'. The director - whose last film was an adaptation of 'The Great Gatsby' starring Leonardo DiCaprio - has now unveiled the leading male cast for the upcoming Netflix series, which is awash with up and coming talent.

More: Read our review of 'The Great Gatsby'

TJ Brown plays 14-year-old technology buff Boo-Boo, the youngest of the group. The actor himself is actually from the Bronx, and was picked up by the show's producers busking in a subway. Then there's Justice Smith (who'll appear alongside Cara Delevingne in 'Paper Towns' this Summer) who plays the ambitious and super-smart Ezekiel, Shameik Moore (star of Rick Famuyiwa's 'Dope') who is the charismatic and adventurous Shaolin Fantastic, and Skylan Brooks (actor in Jake Gyllenhaal's upcoming flick 'Southpaw') who will portray their protective and reliable friend Ra-Ra.

More: Skylan Brooks stars in 'The Inevitable Defeat Of Mister And Pete'

'The characters these young actors play in 'The Get Down' unwittingly become a band of brothers', Luhrmann explains. 'Any great group is always made up of distinctly different characters, and the actors we are privileged enough to invite into the roles of Ezekiel, Shaolin Fantastic, Boo-Boo and Ra-Ra all have the distinction of being from such diverse backgrounds. I know they're collectively on the beginning of a thrilling journey with a big story to tell.'

The movie explores New York City in one of its most neglected times; on the brink of bankruptcy with a world rife with violent crime within it. Meanwhile, a group of aspiring artists discover their talents as they try and make a name for themselves within this depressing existence.