Set in recession-blighted New York in 1977, 'The Get Down' tells the story of the birth of hip-hop.

Ahead of the premiere of ‘The Get Down’ exclusively on Netflix on Friday (August 12th), we take a short look at the new mini-series that promises to offer a snapshot into the lives of early hip-hop culture as it was born in New York in the late seventies.

Described as “a mythic saga of how New York at the brink of bankruptcy gave birth to a new art form”, ‘The Get Down’ is set in 1977 during the dying days of disco but before hip-hop and rap became well-known.

“I'm probably the least obvious person you might think to be curating and trying to get this story told,” Luhrmann himself told The Independent this week, as a director who is known much more for his fantastical movies and re-tellings of the likes of Moulin Rouge and Romeo + Juliet.

However, the truth is that the director had spent over ten years developing the concept behind ‘The Get Down’ before the series was announced in February 2015. "Growing up in an isolated town in Australia, I saw New York from a distance as this amazing creative capital with very sophisticated art forms bursting forth."

The cast he's assembled features a handful of established names in Shameik Moore as Shaolin Fantastic, a child of the streets, and Justice Smith as Zeke, a more driven and focussed character, who together constitute the two main characters as Shaolin introduces Zeke to ‘the get down’ – an underground world of DJs and wordsmith MCs.

Other familiar names such as Jaden Smith, as a graffiti artist, and Jimmy Smits, a mob boss, are included in the cast, but there’s a good number of newcomers, including Herizen Guardiola and Yahya Abdul-Mateen II. 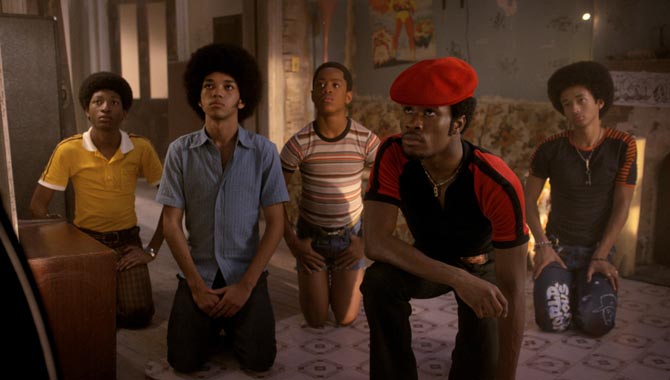 “Our story emerges from the contrast between the shiny sophistication of disco and the emerging music art form of hip hop,” says executive producer Catherine Martin, who has worked closely with Luhrmann for almost three decades. “The movement was about people expressing themselves, who they are and where they were. It’s the sound and poetry of the streets.”

“If you visited midtown Manhattan and went to the glittery discos of the city, you’d never know this thing was happening,” adds hip-hop historian and co-producer Nelson George, who was one of the first journalists to write about the budding genre in its early days.

“But in the outer boroughs and in Harlem, something was growing via word of mouth, cassette tapes, and street parties. It’s the contrast between these two visions of music that helps drive our narrative.”

In a brand new teaser trailer you can see below, three young women are seen singing and dancing along to Vicki Sue Robinson’s 1976 hit ‘Turn the Beat Around’. As a visual and musical experience, it's clear that a lot of work has gone into re-creating the fashions, sounds and vibes of that time and place.

Watch an exclusive clip for The Get Down: