Review of Mirrored Album by Battles 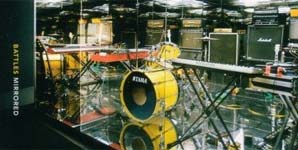 To even contemplate describing Battles via one pun-orientated sound bite would be a near-impossible, mind-boggling experience for even the most experienced of wordsmiths.

Quite simply, what started out as a side-project for four guys with too much time on their hands has quickly emerged as one of 2007's hottest properties. Last year's 'C/B' EP might have been a taster for what was around the corner, but it was the arrival in early spring of this year of the phenomenal 'Atlas' 45 that really set tongues wagging, limbs flailing and queues forming outside record emporiums both on the high street and in cyberland.

The fact they are signed to Warp Records, Sheffield's prime exponents of all things innovative in dance culture should give some indication as to what to expect, but believe me, that doesn't even tell half the story.

What you have to remember first of all is the varied, contrasting backgrounds that each of the four assembled pieces of Battles have sprung from. Whether it be the jazz-tinged opulence of knob-twiddler-cum-vocalist Tyondai Braxton or the military-esque skin pounding of ex-Tomahawk and Helmet sticksman John Stanier, there really isn't any genre or remotely obvious sub-genre for that matter to incorporate such a diverse collection of influences and ideas such as these.

'Mirrored' then, for all its glory, contains eleven pieces of music that for the most part need to be heard to be believed. Ranging from avant-garde techno to ambient math-rock, layered jams to squiggly elements of prototype prog-rock, this record simply encapsulates all you need to know about the last thirty-five years of forward-thinking, evolutionary music and while at first the bold array of ideas and sounds can make it uneasy listening in one complete sitting, by the third or fourth listen it's hard not to become hooked by the non-conformist musings that combine to make this the most original record you'll hear all decade.

As highlights go, the most obvious one is the aforementioned 'Atlas', but 'Ddiamondd' and its echoed vocals set to pulsating rhythms and 'Leyendecker''s uninhibited technoclaustrophobia are worthwhile additions to anyone's iPod shuffle, while 'Prismism' is like a backwards journey through the comforts of madness played on an out of scale rickenbacker.

Whilst it's probably fair to say 'Mirrored' won't be soundtracking many commercial radio events this summer, the sound of the underground remains in perfectly good fettle, and Battles' rise to the cream of the crop is assured with this record.