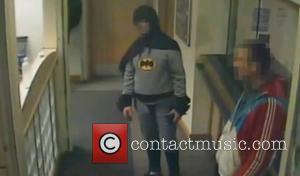 Picture: A vigilante dressed as Batman has handed a wanted person into Bradford police. The caped crusader entered Trafalgar House Police Station in the early hours...

Batman might have his hands full with the likes of Bane and The Joker a lot of the time, foiling their intended paths of destruction, but don’t think for a second that the caped crusader isn’t too busy to keep an eye out for the little guy these days – local police in the UK city of Bradford found out that the super hero was still more than available to tackle the petty criminal.

"The person who brought the wanted man into the station was dressed in a full Batman outfit. His identity, however, remains unknown." This was a quote from a West Yorkeshire police officer regarding an occurrence that saw ‘Batman’ – or a man dressed like him – bring in a wanted suspect to the cells. Strangely enough, police believe that the two might have been cahoots, given that there wasn’t much resistance from the man being taken into jail, while the body language suggested a familiarity between the two.

Police have ruled out that this is a bona fide vigilante roaming the streets of Bradford on their bidding, and rumours are also amusingly sweeping the internet as to who might be behind the mask. MP for the area George Galloway has written on Twitter that he hasn’t re-visited his cat suit wearing past, on Celebrity Big Brother, writing "Contrary to rumours sweeping Gotham, I am not the Bradford Batman, however I take my hat off to him and wish him luck in the future." The man handed in was charged with handling stolen-goods and fraud-related offences, according to The Guardian.