Review of Two Suns Album by Bat For Lashes

Review of Bat For Lashes album 'Two Suns' released through The Echo Label. 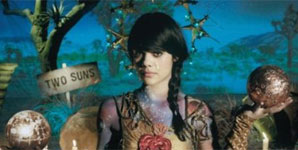 Bridging the gap between Mother Earth and Outer Space, Natasha Khan returns under her Bat For Lashes moniker with Two Suns, a vaguely conceptual album that deals with partly with the breakdown and break-up of a relationship and also reveals her alter-ago, Pearl. Pearl is a sultry blonde temptress that Khan 'discovered' when she lived briefly in New York. Musically, the Pearl / Natasha divide is not clear-cut or divisive. On tracks such as 'Pearl's Dream', though, there is a certain sense of drive; a departure from the flightiness and heartache of the tracks that surround it.

Two Suns is not an immediate companion. There is too much going on, sonically and lyrically. Khan deals in density but she specialises in making it seem spacious. On first listen, the album seems pure fluff, ineffective and vacuous. Further inspections prove otherwise. Lyrically, Khan packs a similar punch to PJ Harvey, but conceals it in a far more ethereal sounding glove. Instrumentation is a huge part of the Bat For Lashes sound, with handclaps and field recordings nestling amongst piano and string arrangements. The resultant sound is somewhere between Kate Bush and Leila - though neither comparison will truly suffice.