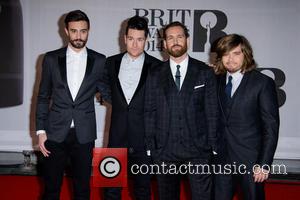 The rocker made his debut as a play-by-play sidekick for BBC Radio Devon, just days after his band won the British Breakthrough Act prize at the Brit Awards.

After the thrilling game, which Plymouth won, Wood said, "You can't swear or shout at the referee and I had to contain myself when we scored, but I had a great time."

Wood had another reason to celebrate at the weekend - his band returned to the top of the U.K. albums chart on Sunday (23Feb14).