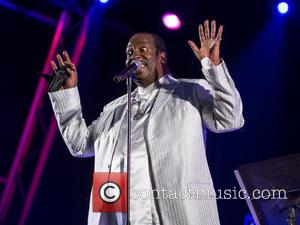 Soul superstar Barry White had a fitting farewell when loved ones including Michael Jackson turned out to see him buried at sea.

The legendary singer's ashes were scattered from a yacht off the Californian coast yesterday (14JUL03), as 40 friends and relatives gathered to say their last goodbyes.

Pop king Jackson - White's godson - kept the sun off his delicate face as he stifled tears during the emotionally charged ceremony.

The heavyweight WALRUS OF LOVE's ashes were scattered by his estranged wife GLODEAN JAMES.

An onlooker says, "It was a very moving service. People were crying.

"In many ways it was a bizarre sight. There were women tottering around in high heels, Glodean with six-inch-long gold nails and Michael Jackson looking like he was in a circus with a guard holding a silver umbrella over his head."

The singer's eight children were present, but missing was his last love KATHERINE DENTON and eight-month-old daughter BARRIANA. Barry's other children are calling for DNA tests to prove she was indeed his child.