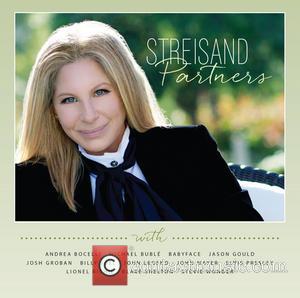 Barbra Streisand has thanked her fans for helping her secure an album chart record in the U.S. - becoming the only artist to score a number one in each of the last six decades.

The singer's new duets album, Partners, debuted atop the Billboard 200 on Wednesday (24Sep14), and thrilled Streisand has taken to Facebook.com to acknowledge the feat.

She writes, "Hearing the news that 'Partners' entered the charts at #1 was an overwhelming feeling of joy!!

"Being told that I've had #1 albums in six consecutive decades makes me feel truly blessed and grateful to have such loyal fans. I feel you rooting for me and I so appreciate all of your energy and support.

"It's especially sweet since I get to share this moment with my wonderfully talented partners who I had the pleasure of singing with: Michael Buble, Stevie Wonder, John Mayer, Babyface, Billy Joel, Blake Shelton, Lionel Richie, Andrea Bocelli, John Legend, Josh Groban, my beloved son Jason Gould... and last but not least, Elvis Presley... forever The King!"