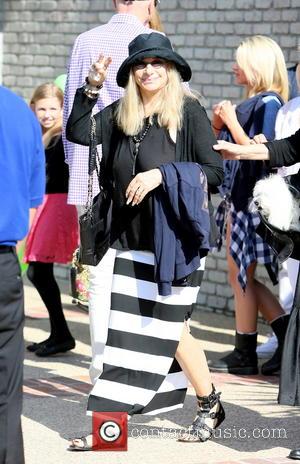 Veteran entertainers Barbra Streisand and Barry Manilow are bringing the likes of Elvis Presley and Whitney Houston back from the dead to feature on their respective duets albums.

The Funny Girl icon has been working on Partners for the past two years and on Monday (11Aug14), she unveiled the cover art for the project, revealing a collaboration with the King.

Details about the duet have yet to be released, but he won't be the only big name featured on Partners - Streisand has also headed into the studio with Stevie Wonder, Billy Joel, Lionel Richie, Babyface and Italian opera singer Andrea Bocelli, as well as her younger contemporaries Michael Buble, Josh Groban, Blake Shelton, John Mayer and John Legend.

Her singer son Jason Gould, whose father is actor Elliott Gould, will also make an appearance on the September (14) album after previously joining his famous mum onstage during her U.S. and European tours in 2012 and 2013.

Meanwhile, Manilow has also headed down the collaboration route for his next release, which will be fully comprised of duets with late legends.

In a message on his Facebook.com page, the singer reveals he wasn't completely sold on the idea of another all-star duets album, so he decided to draw inspiration from beyond the grave.

He writes, "I came up with a weird idea: What if I could make duets out of my favorite songs by artists that are no longer with us? What if I could I actually sing with John Denver, Whitney Houston or Judy Garland?

"Well, after months of creating brand new duet arrangements of famous songs done by these legendary artists, I did. I actually sang with them. And we're just about done with the album...

"The album is a miracle. It's been a huge undertaking, musically and technically.

"It was an honor singing with Whitney (I ran for the Kleenex when I heard her voice!), Dusty Springfield, Louis Armstrong and more. I hope you'll like this one. I'm very proud of it. The release date is sometime in late October."