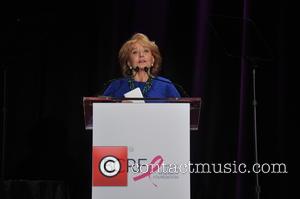 Picture: Barbara Walters - Many celebrities attended the Breast Cancer Research Symposium and Luncheon which was held at the Warldorf Astoria in New York City, United...

The former The View co-host was the top honouree at the Breast Cancer Research Foundation luncheon in New York City on Thursday (09Oct14), and when she took to the stage to accept the accolade, she confessed she secretly survived the disease years ago.

Walters said, "Some years back, more than five now, I discovered a small lump in my own breast. Under the expert care of my doctor I had a lumpectomy."

"I haven't talked about it. There was no need to. There were other choices that were possible. This was mine. I told a few people and I'm fine. I wasn't worried because I knew that the advances made in treating breast cancer including lumpectomies were possible. Research made my treatment possible."

She added, "I can remember when it was a death sentence and it terrified me. It still frightens me. But now we know there is treatment."

It isn't the first time Walters has had a fright with the deadly disease. While talking about Angelina Jolie's preventative double mastectomy on The View last year (13), the journalist admitted she had both of her ovaries removed after her sister passed away from ovarian cancer.