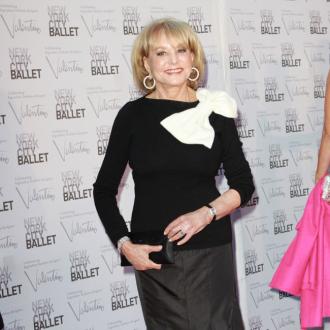 Barbara Walters has been hospitalised.

The legendary US chatshow host was rushed to a medical facility on Saturday night (19.01.13) after falling and cutting her head.

A source told gossip website TMZ.com that the 83-year-old TV personality is alert and doing well after falling on a stairs and cutting her forehead during a visit to the British Ambassador's residence in New York City.

Jeffrey W. Schneider, senior vice president of ABC News, also insisted she is doing well and told POLITICO: ''Out of an abundance of caution, she went to the hospital to have her cut tended to, have a full examination and remains there for observation. Barbara is alert (and telling everyone what to do), which we all take as a very positive sign.''

Barbara - who recently sat down with Mariah Carey and One Direction - is widely regarded as among the most respected TV presenters in America.

Last year she hit the headlines after being snubbed by Lindsay Lohan, who cancelled their scheduled interview at short notice because she didn't want to discuss her legal problems with her long-time family friend and went on a number of other programs instead.

Barbara spoke about her decision on 'The View' as part of ABC's 'Day of Giving', revealing she was so ''moved'' after answering phones to take donations that she decided she could ''stretch a little'' bigger with her amount.

She said: ''I thought these people are making sacrifices and have very little. It's not that I can just give money away so easily, but I'm very fortunate. ... I thought if they can do that, then I can stretch a little bit. Not everybody is fortunate as I am to do that.''