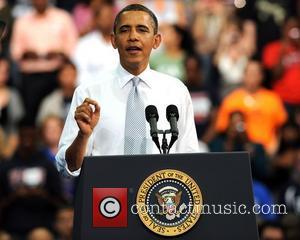 Picture: President Barack Obama at Florida Atlantic University to speak about the economy and the Buffet Rule, a principle for fairness that would ensure that American...

Star studded action flick The Expendables 2 has kept a tight grip on the top of the US Box Office, fending off a host of newcomers that included an anti-Barack Obama documentary.
The film, which stars action legends such as Sylvester Stallone, Jason Statham, Chuck Norris, Bruce Willis, Jet Li and a much anticipated return to the screen (in a main role at least) from Arnold Schwarzenegger, all but readied itself to be made into a trilogy as the stars flexed their staying power.
The Jeremy Renner starring reboot of the Bourne series, The Bourne Legacy, held on to the number two spot for a second week running, meanwhile newcomer Premium Rush performed the best out of a crop of new releases that underperformed massively during the US' weakest turn out at the box office this year. The Joseph Gordon-Levitt staring thriller was accompanied by fellow underperformers Hit and Run and The Apparition, which failed to even crack the top 10.
Meanwhile, the right-wing documentary 2016: Obama's America was the biggest surprise of the week, grossing $6.2 million despite only playing at 1,091 cinemas across the country. The über-conservative doc now ranks 6th in all time political documentaries, behind the Al Gore feature An Inconvenient Truth and four Michael Moore documentaries, BoxOfficeMojo.com reports.