Barack Obama opens the show with a rousing speech.

Finally, Lin-Manuel Miranda's rap musical 'Hamilton' has arrived at its spiritual home, the White House, for a special performance opened by President Barack Obama who revealed it as a favourite in the Obama household. He introduced the Broadway show with much humour and enthusiasm as he explained the significance it has on American history. 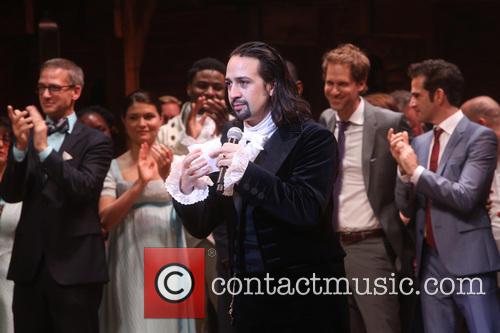 'Hamilton is not just for people who can score a ticket to a pricey Broadway show. It is a story for all of us, and about all of us', Obama declared in a riveting speech ahead of the performance in Washington, D.C. yesterday (March 14th 2016). The play was arriving at the White House for the first time and was live-streamed for all to see.

For those who have been living under a rock for the past year and don't know what 'Hamilton' is all about, here's a brief rundown. In 2004, Ron Chernow released a biography about and entitled 'Alexander Hamilton'; one of the Founding Fathers of the United States, the first United States Secretary of the Treasury and aide to George Washington. He founded the Federalist Party and the financial system, which was an impressive feat for a mere orphan shipped over from the Caribbean. He met his death in 1804 at the hands of Vice President Aaron Burr, to whom he lost in a duel, but more than 200 years later his legacy inspired a young theatre buff named Lin-Manuel Miranda, who casually picked up the biography at an airport.

From there he created a ground-breaking hip-hop musical in which Miranda himself stars and featuring and endless list of musical numbers. He'd already earned two Tony awards and a Grammy for his 2008 Broadway hit 'In The Heights', but 'Hamilton' has brought with it yet more awards and an enormous fan-base having, as Obama put it, 'turned musical haters into diehard fans'.

'Hamilton I'm pretty sure is the only thing that Dick Cheney and I agree on', Obama joked, opening up about his and First Lady Michelle Obama's love for the show. 'We hope that the remarkable life of Alexander Hamilton will show our young people the possibilities within themselves, and how much they can achieve in the span of a lifetime.'