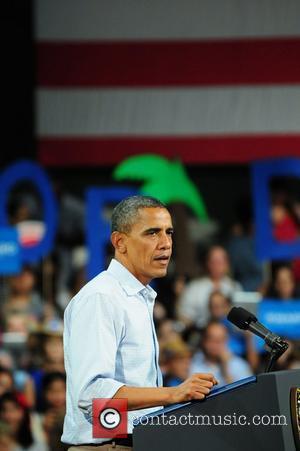 And so the day finally arrives. After months of campaigning, it's officially Election Day 2012, with America set to choose between President Barack Obama and Republican Mitt Romney. There's nothing more either man can do but sit back, try to relax and hope the votes flood in.

One thing's for sure, it's going to be no landslide for either candidate and both will pull in millions of votes to make it one of the closest run elections in years. As a Democrat, Obama can rely on California and New York, and Romney is certain to take Texas, Oklahoma, South Carolina - basically everything in the south - though the election hinges on the swing-states Florida, Nevada and most importantly, Ohio. The bookmakers certainly think they know who's going to be President on Wednesday, offering odds of around 1/6 on President Obama with around 9/2 on Mitt Romney. We're pretty sure Republicans may think that's worth a flutter, though if you're still unsure about who to vote for - or think you've voted for the wrong candidate - check out the celebrity endorsements to see if your favourite stars agree with you!

Possibly Obama's biggest celebrity backers, rap mogul Jay Z and his superstar wife Beyonce have no doubt swayed millions with their endorsement of the President. As well as throwing Obama a lucrative fundraiser at his New York club, Jay Z also blasted Mitt Romney during a performance at a Democratic rally in Ohio last night (November 5, 2012). Jigga spat the lyrics, "I got 99 problems but Mitt ain't one."

Watch the performance below:

The rocker officially endorsed Romney back in October, saying, "I am very proud to say that we had elected our first black president. I'm sorry he didn't do a better job. I really wish he would have, I do." Kid Rick, real name Bob Ritchie, addressed thousands who came out to hear Paul Ryan, Romney's running mate, speak at Oakland University. Though he doesn't have quite the star power of Jay Z, Kid Rock has certainly been a helping hand to Romney's campaign.

Watch his endorsement below:

Ah, good old George. The Descendants star has been a close ally of Obama's since his win in 2008 and stuck with the President through the more difficult periods of his initial tenure. Like Jay Z, Clooney has done more than just namedrop the President at various glitzy events - he threw his own fundraising in May, pulling in $15 million for Obama's re-election campaign. The actor and activist invited the likes of Jeffrey Katzenberg, Diane Von Furstenberg, Barbra Streisand and James Brolin to his Studio City home for the event.

Watch a video of George Clooney campaigning for Obama below:

Black actress Stacey Dash caused a stir earlier this year, by gushing over the talents of Mitt Romney and endorsing him for the Presidency. In a lengthy blog post, Dash said, "I believe that Governor Mitt Romney believes in the American people. That we can be self-evident, that we are capable of achieving the American dream. That there is enough for everyone." Tweeting to her 339,500 followers on Monday, "What a wonderful present it will be to have you Inaugurated as The President Of The USA on my birthday 1/20/2013! God Speed! @MittRomney." Dash's way of endorsing Romney didn't sit well with actress Vivica A. Fox who told The Grio, "I don't know why she [Stacey Dash] had to do a photo shoot in a Baywatch red swimsuit with the boobs and the whole flag behind her."

Watch Stacey talking about Romney Live on CNN below:

Easily the greatest political endorsement of all time, Snoop Dogg revealed his allegiance to President Obama in a "pros and cons" list posted on Instagram in October. Among his justifications for not voting for Romney, Snoop wrote, "This mother*cka's name is Mitt," and "B*ch got a dancing horse." Another con was that Romney "Always talks over people like he's better than them, b*tch I will beat the sh*t out of you."

More on Snoop's Instragram endorsement below: