Us President Barack Obama has slammed the third 'Hangover' movie during an interview with actor Zach Galifianakis on his 'Between Two Ferns' spoof chat show. 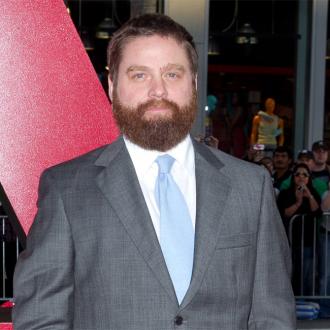 Barack Obama has mocked 'The Hangover Part III' during an interview with Zach Galifianakis.

The US President showed his sense of humour during an appearance on 'Between Two Ferns', a spoof chat show hosted by the actor - who played Alan Garner in the comedy franchise - as he also criticised the host's acting skills.

The 44-year-old actor asked Obama: ''What is it like to be the last black president? It must kinda stink, though, that you can't run three times,'' to which the president replied: ''No, actually, I think it's a good idea. If I ran a third time it would sorta be like doing a third 'Hangover' movie ... it didn't really work out very well did it?''

He went on to say: ''I have to say I've seen this show before and some of the episodes have probably been a little bit better than this. For example, the one with Bradley Cooper, that was a great show,'' adding, ''He kinda carried that movie didn't he?''

Zach is seen shuffling in his seat before asking: ''Which film are you speaking of?'' and Obama quipped, ''Those 'Hangover' movies, basically, he carried them.''

Obama, 52, described Bradley, who was Zach's co-star in the movies, as a ''good looking guy'' and the comedian hit back, saying: ''Good for him ... being like that in Hollywood, that's easy, try being short, fat and smell like Doritos and try and make it in Hollywood.''

Zach went on to call the president a ''nerd'', an insult he laughed off.

He responded: ''Do you think a woman like Michelle would marry a nerd, why don't you ask if she thinks I'm a nerd?''

The interview, which was recorded two weeks ago, helped to promote healthcare.gov and was posted on website Funny or Die today (11.03.14).

Obama followed in the footsteps of stars including Justin Bieber and James Franco who have appeared in the cult online videos.